You Need A Budget 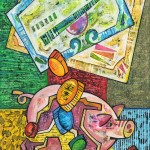 In general I’ve always felt I’m pretty good with money. My parents taught me the value of a dollar, why it is important to save money, and why debt is bad. But I’ve never really had a budget. I never felt I really needed one because I wasn’t living pay check to pay check and at the end of every month I had spent less money than I brought in.

However, over the past few years as I make more money I started to succumb to lifestyle inflation. In most respects I think I’ve done a pretty good job of cutting back and not giving in but it is a constant battle. The other thing I realized is I couldn’t tell where all my money is going. Yeah I have a record of it because I rarely pay in cash and use my credit card for everything (paying it off in full each month) but that doesn’t do much for me if I’m not managing my money. So I thought it is time for me to get a budget.

I look at several budget programs and apps. Most either came with a monthly fee, which I want to avoid, had bad reviews, missing key features I wanted or in general just didn’t catch my eye. Then I came across You Need A Budget. In general it is like any other budget program out there. You put in your current money, expenses and then track what comes in, what goes out. But what was different about YNAB that I liked was instead of looking back at what you spent, it asked you to look forward as to what you wanted to spend. You also worked off of the current money that you had instead of what you were going to get.

Like any budget program you input all of your bills, expenses, and savings goals. Then you assign all your money a job. Like a good budget it will tell you how much you need to pay your bills, what you will have left over. But the interesting part is because you gave each dollar a job, that money is accounted for in your on going budget. Lets say I budget $100 for gas for every month but I only spend $90 on gas this month. That $10 carries over to the next month. So now I have my original budget of $100 plus the $10 which equals $110 for gas. Does it mean I have to spend $110 on gas the next month? No. Maybe again I only spend $90. So the next month my gas budget has $120. This month gas costs more and I end up spending $120. Since I let the extra money carry over each month, I now have the extra money to pay for the extra cost in gas without if affecting the rest of my budget. All because I gave that $100 each month a job, paying for gas.

But what happens if you overspend in a category? YNAB will help you divert money from one category to another. Then next month it allows you to correct the mistake. I’ve already had to do this several times. I didn’t budget enough for electricity or pet expenses. So instead of going out to eat I diverted that money to paying bills and then I adjust for the next month.

In the end YNAB helps you to use this month’s income (or two month’s ago, three month’s ago, etc income) to pay for next month’s expenses. It has really helped me get a handle on my spending. I am able to project out my expenses each month way into the future, set aside money properly to go on vacation and to do renovations on my house. I’ve cut my spending on stupid costly things that add up and am winning the battle on lifestyle inflation!

I highly recommend You Need A Budget it is $60 or if you keep an eye out on Steam it goes on sales every few months. I was able to buy it for $15.